It’s like Scotland had voted the same way as England and Wales and wanted to remove itself from Europe. When, in fact, it voted 62-38 to remain in Europe.

It’s perfectly true that in 2014 the Scottish people voted to remain within the UK. They did so based on a promise from David Cameron, conveyed through Gordon Brown (because Cameron knew he was unpopular in Scotland, and no one would believe him) that we would have the most powerful devolved parliament in the world with as near to federal powers as it was possible to get in a union like the UK’s where one member comprises 85% of the population.

Now, you really only have to look around the world, to Canada, the USA, Denmark, Germany, Australia, India, Belgium… and so on, to see that that is utter rubbish.

The powers that we were promised were watered down firstly in the Smith Commission (with 6-4 unionist-independentist members), and then further by the Tory/Liberal Democrat, largely English Cabinet before being sent to Scotland. When a bill for more powers came before the UK parliament, no amendments put forward by recently-elected Scottish MPs were accepted. All were outvoted by UK MPs.

And of course one of the most specific warnings at the time of the Scottish referendum was the threat that were we to leave the UK we would be thrown out of the EU, and that that would be a catastrophe. Some young people, with a view to travelling, studying and working in other EU countries may very well have been swayed by these threats (as may well have been businessmen and others).

No one is asking the Scottish people to make a decision on the outcome of the Brexit negotiations before they are completed. (Although, given that there will be no referendum on the outcome of the talks, no one in Britain will be given a voice.)  It has been made clear that negotiations are to be finished by October 2018…in 18 months’ time. Now is not the time. After the negotiations are completed IS the time, before Scotland is dragged out of the EU against its will.

The Scotland Office says that leaving the EU gives us a unique opportunity, and then continues with some drivel about being fairer and more united and outward looking. Seriously, that is insulting after the warnings we were given about how disastrous it would be to leave the EU.

The UK will not be united. There’s about a 50-50 split, and two of the four integral countries of the union are opposed to leaving and will be badly affected by it.

The UK will not be fairer. A good deal of the fairness which exists here is down to EU law. It’s already been suggested by people like Mr Fox that Britain will have to deregulate business so that they can take advantage of opportunities. A trade deal with the US will demand that we work to their standards (which are far less rigorous than the EU’s). The Human Rights legislation of the EU will be binned and our access to European courts will be removed.

It won’t be stronger, and I have no idea why anyone would think that isolating yourself would make you more outward looking. I’d have thought that with people no longer able to travel, study, live, work anywhere within the large and getting larger EU, we are likely to become even more inward looking that we have always been.

But why am I surprised? The Scotland Office has never represented the will of the Scottish people. How could it, run as it is by the Tories who managed to get only one seat out of 59 in our country in the elections of 2015.

Oh, and how many times are you going to repeat Mrs May’s latest catchphrase “Now is not the time”. Presumably the time is when Scotland has been dragged out of the EU; EU people have left to make a better home for themselves and can no longer vote and people with dual nationality have moved to the other country to which they are attached.

Still, it’s better than the “Brexit means Brexit” and “Brexit is red white and blue” that she came up with before.

Good article in the Guardian:

Of course, if you read some “papers” (we won’t pretend that they are “NEWSpapers”), this is a day to rejoice, for Britain will no longer be shackled to the biggest, richest trading block in the world. Soon it will be free to do trade deals with Trump, Erdogan, Netanyahu and their likes.

And, of course, these trustworthy gentlemen all have the interests of Britain very firmly uppermost in mind. So stand by to be royally stuffed.

Even more frightening, as I may have mentioned before, this whole catastrophe is in the monumentally incapable hands of Mssrs (and I mean that literally) May, Johnson, Davis and Fox.

Scotland’s future can hardly look bright with these people in charge. 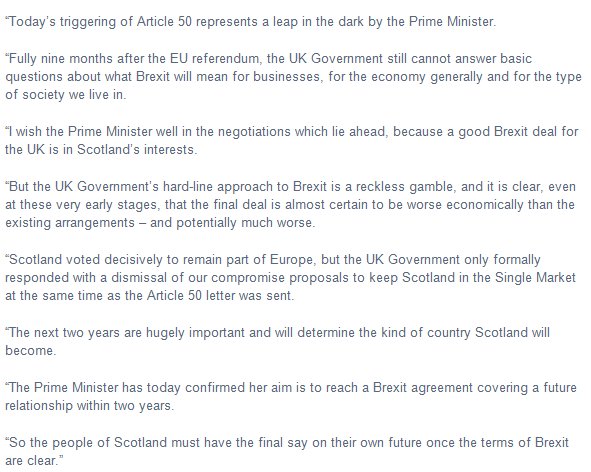 …types Nadine on her Apple iPhone, which she will doubtless be binning immediately. 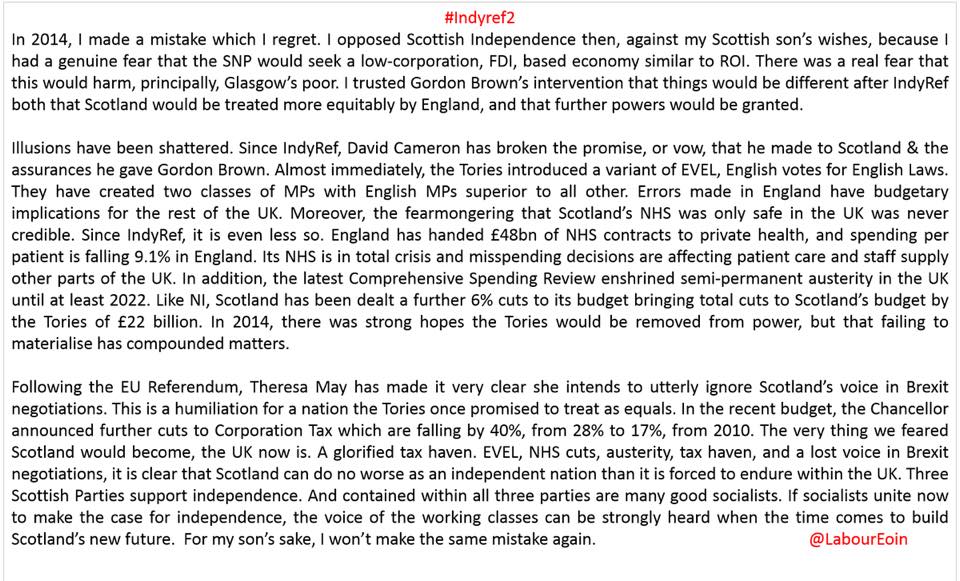 Seems reasonable to me.

We felt a little guilty about letting one of Munguin’s OLDEST friends down so we present a Special Soppy Sunday Supplement with pictures of Western Island beaches. Enjoy…