"If we are to harvest British fruit and vegetables this year, we need an army of people to help."

The Prince of Wales has shared a message in support of the #PickForBritain campaign. 🍓🍏🍅@DefraGovUK pic.twitter.com/a7WIDYo7E0

MUNGUIN WANTS TO KNOW, WHAT ARE YOU WAITING FOR. HIS ROYAL HIGHNESS HAS CALLED UPON HIS LOYAL NEARLY SUBJECTS TO RISE TO THE CAUSE.

Munguin, obviously, will have to decline because of a pre-existing medical condition known as lazy bones syndrome.

I’m surprised that Charlie didn’t immediately volunteer his brother, Airmiles, who, as we know, is incapable of sweating and should be able to work all day without getting a single sweat stain on his golfing gear. Added to which he’s no longer a member of the active royal family and has, in fact, become an even bigger waste of space than before. 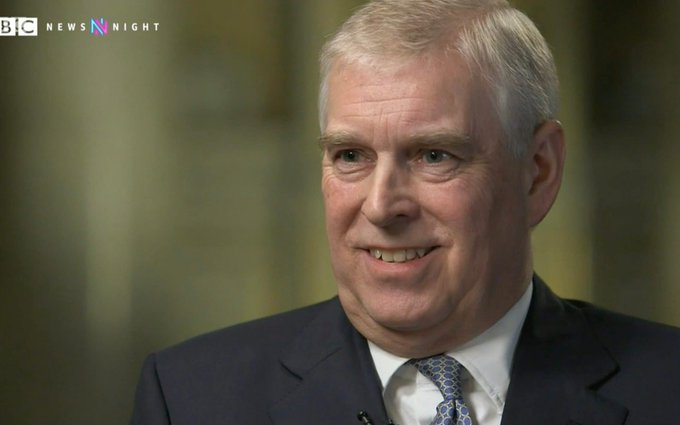 Added to that, and to give us all something to look forward to, his nieces, the pantomime sisters will delight us daily by choosing a different hat to wear while they pick fruit in their fashion stilettos.

If Whatsername wears the middle one, it can double as a loo seat… Things are not always what royalty is used to in the middle of a cabbage field.

Apart from royals, who obviously have a duty to the country, and a really well paid one at that, I think that this cropping should be reserved for all those who voted to get Brexit done. You wanted to take back control of your potato fields and your strawberries. 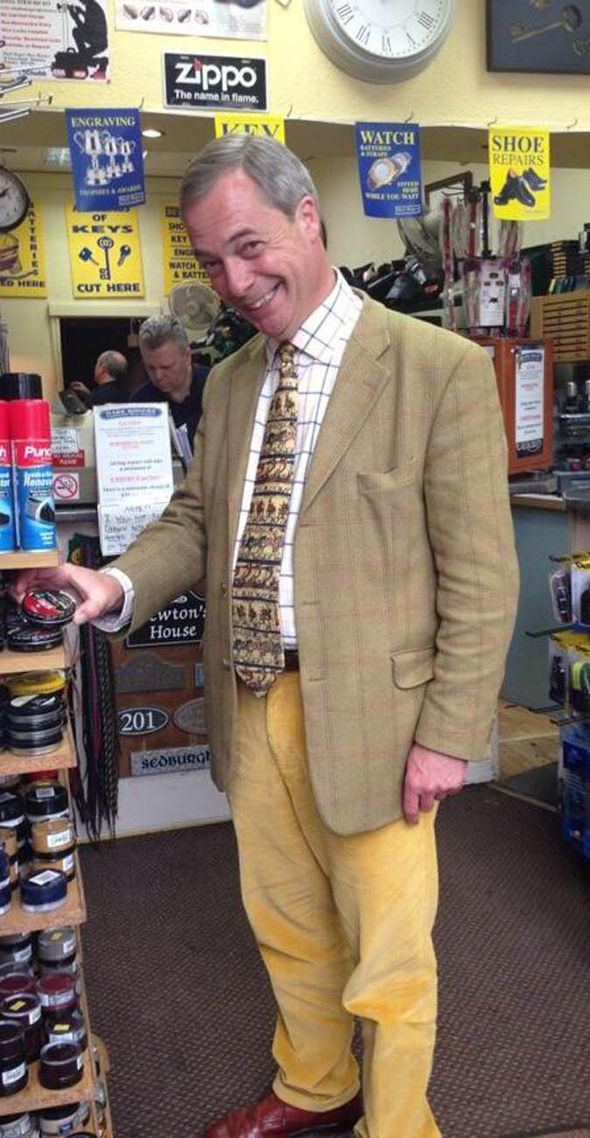 Just a wee laugh I couldn’t help sharing with you (as I promised to add something light-hearted to every post during these hard times):

I’m going with Nancy Pelosi on this one… he is morbidly obese!

I know I’m on holiday, but I was looking at Twitter and I saw his royal highness giving it “let’s all pull together in the good old British way” talk in a shirt and tie and a jacket that cost more than my house… and I thought, sod this holiday lark.

the absolute state of it (literally) pic.twitter.com/w98ysS0ovF

They sang us “Auld Lang Syne” and you, Farage, in your turn, made an idiot (me being polite) of yourself.

Now, I’d imagine that most people in Brussels know that you’re a blethering old drunk who smells like a stale ashtray, and, as such, they probably don’t listen to you,  your little playmates or, indeed, your mad old Granny Ann.

But I’d lay money on the fact that this clip will have been shown on news programmes around the world, from Greenland to New Zealand; from Japan to Paraguay.

You just showed the world what a set of ill-mannered, immature, boors you are, and your behaviour will have refected not just on your miserable selves, but on your country too. 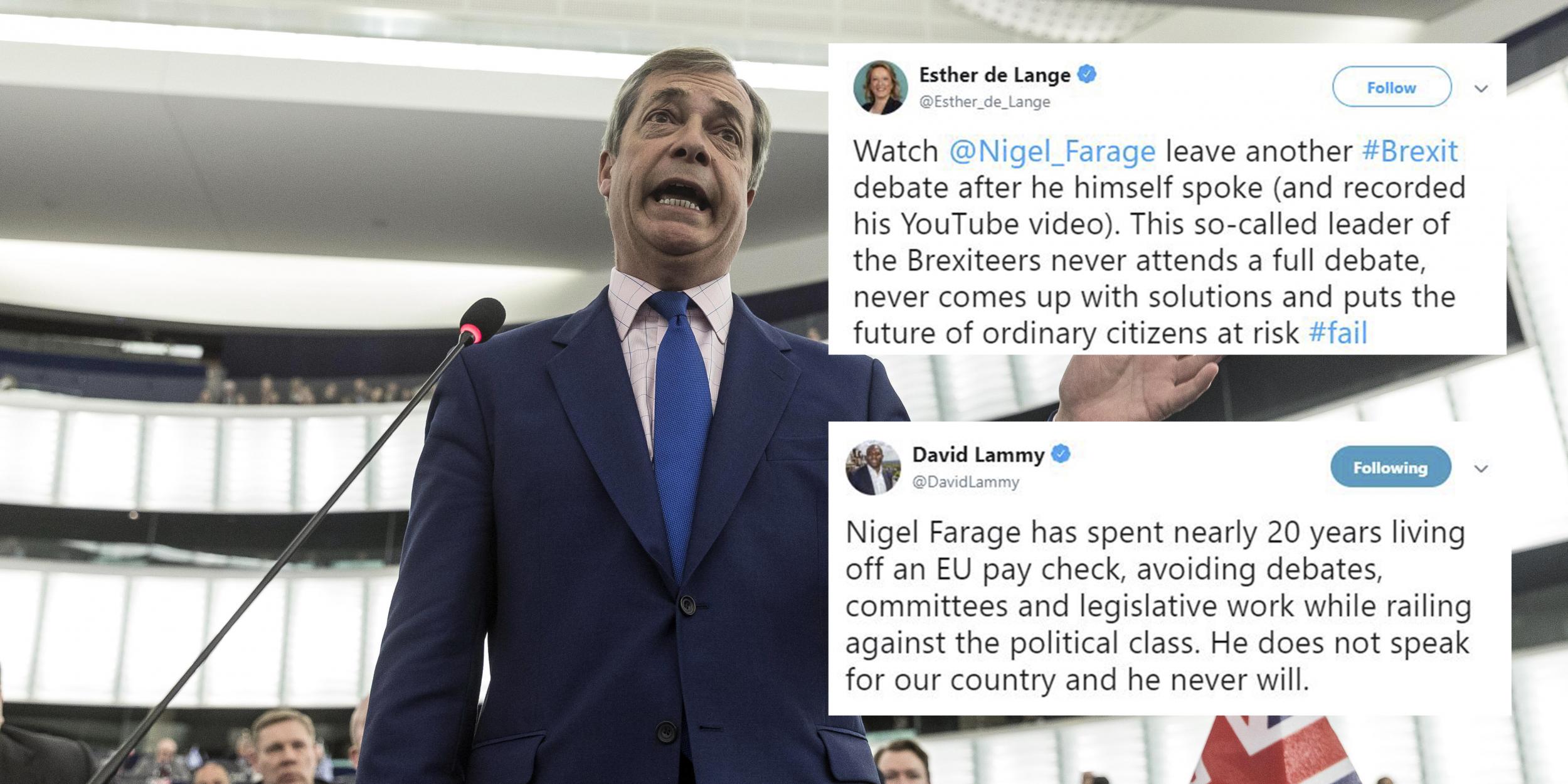 Furthermore, with a set of extremely difficult negotiations yet to come with the EU, you have done your beloved UK absolutely no favours… and, make no mistake, favours will be what the UK will be looking for.

Even fervent supporters of Brexit will have thought you an embarrassment.

We most certainly cringed.

Today was to be the day of the big empty gesture.

The MP from the 18th century, Jacob Rees Mogg, was going to protest at the UK government’s capitulation over fishing, by throwing a load of dead fish into the Thames.

That would have shown them. Well, it would have if it had been even half organised. (No, OK, it wouldn’t. Barnier would still have been laughing at the cheap comedy Jeeves and Wooster show.)

But, of course, like everything else they do, it wasn’t organised at all.

They had failed to obtain permission from “Transport for London” to dock and pick up Mr Rees Mogg, and, without permission, Mogg was unable to board… so he had to walk to parliament for a committee meeting instead.

However, docking permission was finally sorted out, and Nigel Farage was allowed to board and make the empty gesture in his stead. (Never let it be said that Nigel turned down the opportunity for a bit of publicity.)

But what is surprising is that Nigel cares about fishing so much.

Except, of course, where there is some publicity to be had. When it’s just boring old meetings, pffff…who cares?

So, in conclusion, it occurs to me that we live in a union of countries where well over a million people every year use food banks, and where others go hungry and cold.

And some very rich playboys with vast fortunes (and shares in Russian Banks) think that it is appropriate to throw perfectly good dead fish into the Thames instead of giving them to a food bank or soup kitchen drop-in centre where they just might alleviate that gnawing feeling of hunger that some kids live with day in day out.