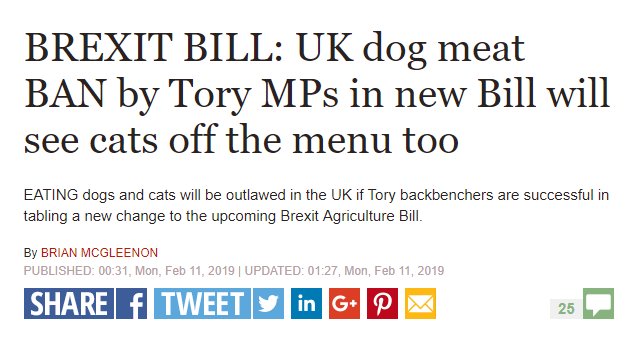 Ah, wait, if we can’t eat our pets… what about our neighbours?

What happened to the 40 trade deals you told us you’d have ready on the day we left.

So far, I understand that Switzerland and the Faroe Islands have signed up. And given that you’ve flown around the world 4 times, first class, in the getting of them, I think that’s fairly crap value for money, don’t you?

.@LiamFox When did signing the trade deals stop being a numbers game? In 2017 you said you were going to sign 40 deals, immediately upon leaving the EU! How are they coming along? pic.twitter.com/gOBVYdkXZy

I’m also rather dubious about the Uk being the 5th largest economy in the world given that the USA, China, Japan, India and Germany are bound to be bigger… not to mention probably France. Certainly, after Brexit, it will be lucky to be the 15th largest…

Unless you count the market in black market food.

I’d say that Nigel Farage’s new party just made a no deal Brexit a lot more likely, given that if the Maybot fails to do what “the British people ‘apparently’ voted for”, ie cut their throats and stab themselves in the heart, then the Tories will lose big time to old Nigel at the next election.

Oh, what fun we are having.