Dedicated to Agnetha, Benny, Bjorn and (Anni)Frida and all ABBA fans

It’s Party conference season and the third largest party by membership in the UK has just finished theirs.

Many, if not most of us, are still traumatised by the sight of the Prime Minister sashaying on to the stage to the tune of “Dancing Queen”.

Don’t know about you but I certainly thought “Mamma Mia”!!!

No doubt designed to divert our attention away from the continuing clusterfu, sorry omnishambles, of Brexit where Westminster wants to have all the benefits of membership without being a member. Well, the EU isn’t for budging and it looks like the Tories are about to face their “Waterloo”.

I might not have liked her politics, but Annabel Goldie was a far better leader than the celebrity politician will ever be. Ruth – things were so much better “The Day Before You Came”.

She has no policies other than no referendum; which is probably why she goes “On And On And On” about it.  Opposing Scotland’s right to self-determination is the “Name Of The Game”.

Scotland needs to get out and get out soon. Devolution is “Under Attack”. We should send an “SOS” to the world – help. And the EU seems to be more supportive than in 2014. Partly because the UK will no longer be a member that they will feel obliged to rally behind but also because they’ve now seen what we’ve had to put up with for years.  There have been warm words so we “Thank You For the (mood) Music”.

But Westminster won’t let us go easily; they need our “Money, Money, Money”.

The SNP need to get proactive and “Gimme, Gimme, Gimme” a date for an independence referendum sometime in 2019. Then it really would be a “Happy New Year”. But we the Yes folk need to play our part in persuading people to our side – it will need us to be dedicated and give of ourselves. Each of us will need to be a “Supertrouper” (did you know that Glasgow is immortalised in its lyrics?) Otherwise we risk it “Slipping Through My Fingers”.

An independent Scotland has the chance to soar like an “Eagle”. “Knowing Me, Knowing You”, that’s what we all want. But we cannot lose because in the fight for our nationhood, the “Winner Takes It All”.

Note from Munguin: I am grateful to Panda Paws for this piece… for which she will, of course, be adequately recompensed. The Czech, as ever, is on its way. Although Tris tells me that its an Italian this time.

In summary, I think what we are all saying to Mrs May is that we don’t want to “take a chance on” her. Even if we all think she’s the biggest chancer ever. 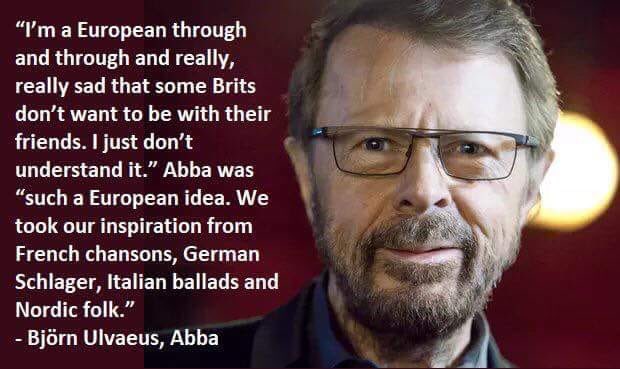 So, Björn Ulvaeus is anti-Brexit.

And Benny Andersson has previously warned a right-wing party in Denmark not to use Abba music in political campaigns.

Musicians obviously have the right to be consulted about who uses their music. The Foo Fighters kicked off in 2008 when John McCain and Sarah Palin used their track at a rally.

Trump recently used an Adele song at a rally which drew this strict retort from her management: “Adele has not given permission for her music to be used for any political campaigning.”

This is maybe something all politicos might think about before they appropriate someone else’s music. Not everyone wants their music associated with a particular cause, whatever it is. Permission should always be obtained in advance of use. Remember it says somewhere on all discs: “Unauthorised public performance, broadcast and copying prohibited”

But, I think, if I were May, I would get in touch with these two and see if they would allow her to use this…

Even if not, just listen to these voices…