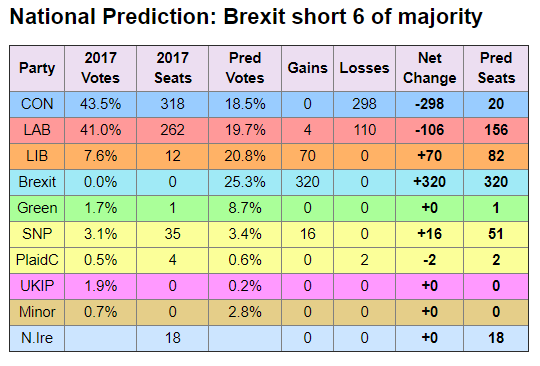 Electoral Calculus (Tweet)
Did you know? that @YouGov poll results are a bit different from the other pollsters: they see #LibDem ahead of #Labour. If that’s right, and they were quite accurate at the EU elections, then a YouGov-only poll of 4 polls gives this forecast: (link: https://twitter.com/ElectCalculus/status/1141982642616852480/photo/1) pic.twitter.com/wPiPzzDSmX

That result seems a bit extreme to me, but it is an amalgam of four polls so although I take the results with a pinch of salt, I reckon it indicates great changes in the UK.

It seems to me that “Taylor” on Twitter, has it about right here:

Taylor
@dtaylor5633
·
2h
The next UK government will be formed by Farage and the Brexit party If that’s not enough incentive for Scotland to go independent then I dunno what is Let’s get a move on before rUK drags us down the sewer.