I just had a laugh at someone on Twitter:

I find it irritating that we are supposed to make the case for Scottish Independence to No voters yet they don’t bother their arse trying to make a case for the union to us. I mean look at the state of the UK, it an absolute f*****g cringeworthy embarrassment.

At the so-called top, we have mega rich members of the royal family with their money (personal money that we grant them through the Duchies of Lancaster and Cornwall, in addition to their state grants and private incomes) tied up in offshore trusts and dodgy companies that scone the poor.

We have ministers at all levels that can’t keep their trousers around their waists or their hands out of other people’s undergarments.

We have some ministers that brag about hard work that they have done, only to admit when told by parliament to produce it for scrutiny, that, in fact, either through laziness or incompetence, they didn’t bother doing it at all.

We have a minister that breaks every rule in the book and risks security in order to try to do an illegal, dodgy, so-called “humanitarian” deal with a foreign army not known for its humanitarian actions, and who then lies about it, and a Foreign Secretary who makes such a mess of his job that a British citizen held in an Iranian has her sentence doubled because of his stupidity… and still the fool fails to apologise.

And we have a prime minister who watches it all happen and does almost nothing except getting her statue in the waxworks! Maybe Madame Tussauds should have the real one and Downing Street get the dummy?

If this is strong and stable; if this is broad shoulders; if this is pooling and sharing, then frankly, no thanks. We’d have been a lot better off independent.

But we should remember that not all of our politicians are greedy self-serving, incompetent morons.

Famously English Labour MP, Dave Nellist, gave away half his salary. Scottish Socialist took only the average wage when they were in parliament. And SNP and some Scottish Labour MPs either refused to take the massive pay rise they were given a few years ago or arranged for the amount of the rise to be given to local charities.

Alex Salmond, criticised by some for his Fringe show which he took on the road, donated the profits from it to charity. Nicola takes only her 2008 salary, donating the rest the money to the Scottish government. 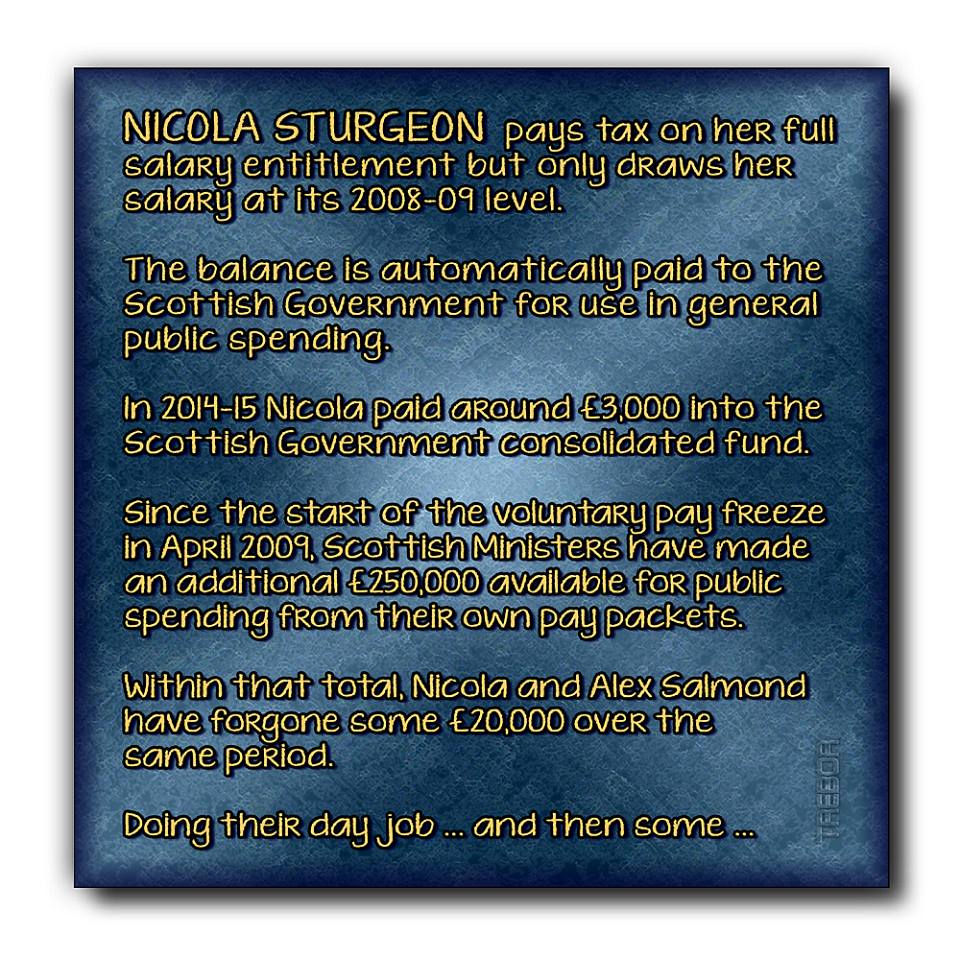 Of that, at least, we can be proud.

41 thoughts on “For all the corruption, there are good people in our politics”