Apparently Mrs May is set to tell the Commons that, following her speech in Florence (where she told the Europeans that we had never liked them anyway, and always felt awkward in the same room as them…wasn’t she supposedly a remainer?), it was now up to them to come forward with a solution.

It seems to be “job done” as far as she is concerned.

This, from the text of her speech to Europe:

On the other hand, it seems that Philip Hammond says this: 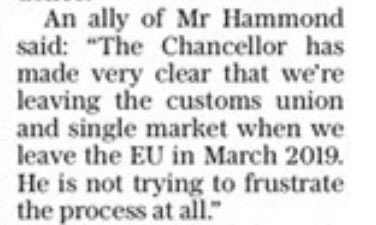 And that appears to be true at VERY considerable costs. From the Telegraph:

Theresa May has decided to commit billions of pounds on preparing Britain to leave the European Union without a deal in a bid to save her premiership.

The spending, which will be “unlocked” in the new year if no progress is made with Brussels, is intended to send a signal to pro-Brexit MPs that she is serious about regaining the upper hand in the negotiations.

Dominic Raab tells the BBC that planning to leave with no deal is underway. The cost of this will be billions.

(So she’s prepared to spend billions on saving her premiership, according to a hardline Tory paper.  That magic money tree is beginning to look as if it is her personal property, to be used only in the event of some event threatening to derail her.)

It’s all very well throwing the ball to Europe and telling them it’s in their court but they seem to be throwing several different types of ball. Mr Barnier doesn’t know whether he needs a tennis racquet, a baseball bat, a golf club or a pair of football boots.

But we can’t help thinking that “the ball’s on the slates”, rather than on anyone else’s court.

Wouldn’t be nice if Britain had a realistic coherent policy on Brexit?

Morning. You catch me at breakfast… and I forgot my napkin!

Conan put a link to this very touching article on the last post. He commented that it deserved a wide exposure and I’m happy to play my little part in that.

There is much discussion, here, at Terry Entoure, at Craig Murray, and I am sure, on many other blogs, about the EU’s role in what is happening in Catalunya. This has nothing to do with these interesting and informative discussions. This is about how a Catalan parent saw what happened to him, his wife and his daughter.

This article is a letter from him to an unnamed but identified by number Spanish GS, and to the Spanish king, Felipe VI.

As Conan says, it deserves wide exposure. Please tweet the original article on if you can, or put it on Facebook, or whatever social media you use.

(Incidentally, the illustration on Munguin’s Republic is entirely separate from the article.)

It seems that Tony Blair has put himself forward as a peace negotiator between Spain and Catalonia.  Apparently the Devil is too busy.

Oh noooooo… it seems to have happened

… there has been a schism in the UKIP. Anne Marie Waters is having a party!

All the talk this morning seems to be about Mrs May. The pound has fallen again, even against the Euro (which is damaged by the situation in Catalonia).

Grant Shapps appears to be the driving force in the “plot” to remove her, which must be a comfort to her, as, to date, he’s been spectacularly unspectacular in most of what he’s ever done. Govey is fighting her corner, reminding anyone bored enough to listen that 14 million people (slight exaggeration) voted for her in the General Election. I’m not sure that Govey fighting your corner is much of an asset, but then who have to remember how close Govey is to Mr Murdoch! And Mr Murdoch fighting your corner is an altogether different kettle of fish.

– Deadliest mass shooting in US history

– Was shooting from 32nd floor of hotel during concert

That’s it so far. (Thanks to The Spectator Index for the figures).